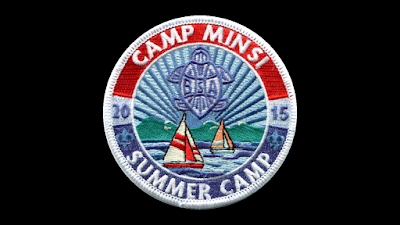 Summer camp is the pinnacle of Scouting’s outdoor program. With many unique program areas, Scouts have the opportunity to experience a variety of exciting activities at Camp Minsi. This summer is filled with new programs and activities designed to peak the interests of every camper - from newest campers to the seasoned veterans. Camp Minsi's Trail to Adventure program is a specially designed to help first-year Scouts advance in the early ranks, while the Afternoon Adventures offer a variety of high adventure options for older Scouts - including whitewater rafting, mountain biking, hiking, and climbing.

The camp's waterfront, located on the 314-acre Stillwater Lake, offers many exciting aquatic programs for Scouts – including swimming, sailing, kayaking, canoeing, and much more. 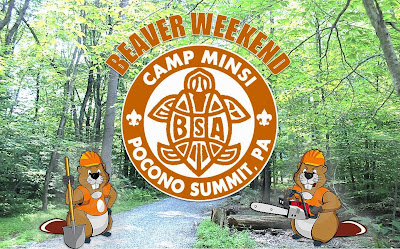 Beaver Day is fast approaching! This event (May 9, 2015) is a special opportunity for Scouts, Scouters and volunteers to come to Camp Minsi and participate in service projects to help us prepare the camp for another busy season of summer camp.

Be prepared! Below is a list of the projects currently planned for Beaver Day. Dress appropriately for the jobs – you may end up working in the dirt, clearing brush, or painting. If you have any special skills, tools, interests or expertise that could help with any of these projects, please be sure to let us know so we can connect you with the right project.


A continental breakfast and a cooked lunch on Saturday will be provided (free of charge) to all Beaver Day participants; and in the afternoon you will have an opportunity to explore camp and participate in some special open programs. We also hope that you plan on joining us for our 8th annual spaghetti dinner fundraiser in the Camp Minsi dining hall on Saturday evening (cost $7 per person).


For more information on any of the Beaver Day projects or to register your unit for the weekend or a specific project, please contact us at campminsi@gmail.com. We hope to see you there!

Once you turn 18, you’re no longer eligible to earn the Eagle Scout rank. But the honorary — and, it must be said, completely fictional — “Bald Eagle Scout” rank has no such age limit.

Joe Kita, a former Cub Scout who left Scouting after Webelos, wanted to earn the honor that eluded him as a youth. So the Men’s Health writer, now a middle-aged man, embarked on the journey to become a “Bald Eagle Scout.”

He visited Camp Minsi in Pennsylvania and teamed up with Minsi Trails Council Troop 1600 to get a taste of the challenging journey to Scouting’s highest honor.

Then he wrote about it. His story is chronicled in the March 2015 issue of Men’s Health, a magazine with a total audience of 13 million. He also tells what he learned in a BSA-produced video you can watch below.

The video and story were first posted at Scouting Wire, which offers this suggestion for how to use the story: “Use this video to tell the Eagle Scout story and invite adults to turn regrets into opportunities by volunteering. Also, the video is a great way to show parents how Scouting makes the most of the little time they have to impact their children.”

My favorite moment in the video was when Kita recounted a trip down the Scout Law trail at Camp Minsi. Those 12 words, each posted on its own sign, really resonated with him. And he thinks parents should take note.

“Do you want your child to be honest? Trustworthy? Reverent? Do you want him to be a leader?” Kita asks. “So you can almost walk that parent down that path and say do you want your son to grow up to be this and this and this? Of course they’ll say yes to each one. But then I would ask them how are you teaching, or how is your son being taught those values?”

Scouting, of course, is the answer. 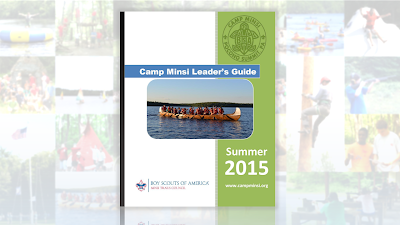 It is hard to believe that it is already time to start thinking about summer camp 2015! We are extremely excited for the 2015 summer camp programs and can't wait to help you begin the planning process. This summer we are preparing a variety of new programs while continuing to build on our lasting traditions.

The 2015 Camp Minsi Leaders Guide is the first resource to answering your summer camp questions. This guide is full of essential information and forms for unit leaders.

The 2015 Camp Minsi Summer Camp Program & Merit Badge Guide will be available on our website by the end of February 2015. This guide will include: merit badge information, program schedules, and details on other activities happening during your week of summer camp.

On behalf of the entire 2015 Camp Minsi staff, we'd like to thank you for choosing Camp Minsi; and we look forward to sharing a memorable summer with you and your entire unit.

Mark Your Calendars! - Important Dates for 2015 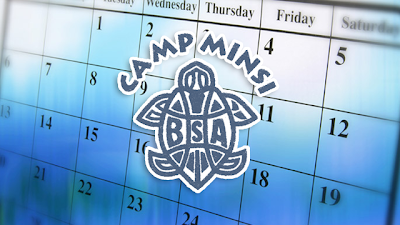 For more than 100 years, the tradition of "Be Prepared" has been the motto of the Scouting movement. As such, we have planned several events to help you get prepared for the 2015 summer camp season. Please be sure to mark your calendars for these important pre-camp meetings and events.

Minsi Trails Council will be holding an informational summer camp meeting for unit leaders on March 11, 2015 at Northeast Middle School in Bethlehem, PA. The gathering will start at 6:30PM, with the meeting starting promptly at 7:00PM. The purpose of the meeting is to share information with unit leaders regarding the council's summer camp programs. This meeting also gives leaders an opportunity to ask any questions, connect with other leaders, give feedback, and meet some of our key staff members. All unit leaders are invited to attend this meeting. If you are have any questions, or need directions, please contact the Minsi Trails Council office at 610.264.8551.

Come out and help lend a hand as we prepare our campsites for Beaver Weekend and summer camp. This day of service is open to all willing to lend and hand setting up tent canvas, cots, and cleaning up around our sites. Work will take place from 9:00AM to 4:00PM on Saturday (lunch and refreshments provided). Please RSVP your attendance to us at campminsi@gmail.com.

Beaver Weekend is a unique opportunity for service, fellowship, recreation, and camping! Take the opportunity to bring your unit to Camp Minsi for the weekend. You can explore the camp, meet the staff, participate in open programs, and give back to Camp Minsi and Scouting through friendly service. This event is completely free! All we ask in return is that your unit gives a few hours of service to the camp on Saturday. Lunch on Saturday will be provided for all who are participating in the weekend. If your unit decides not to make a weekend out of it, you are invited to come just for the day on Saturday to participate in some of the fellowship events and service projects. If interested, please register your unit as soon as possible. A registration form is located in the resources section of this site.

Camp Minsi will hold an informational meeting on Saturday, June 13, 2015. This meeting will be held at Camp Minsi in the Dining Hall starting at 12:00PM. A complimentary lunch will be served as well. This meeting allows us to ensure that all leaders have the accurate and up-to-date information and to answer any questions you may have about your week at camp. You are invited to remain after the meeting to tour camp or check out your campsite. Please do your best to have your unit represented at this meeting. If you are unable to attend, please contact Lisa Empfield, the camp director (campminsicd@yahoo.com), so that she can answer any questions and distribute any vital information to you.

Camp Minsi will host 6 weeks of summer camp this year. To reserve a spot for your troop or crew, contact the Minsi Trails Council camping secretary at 610-465-8568 or visit www.minsitrails.com/camping

It's not to early to start thinking about summer camp 2016! Come stop by our Fall Open House from 12:00pm (noon) to 5:00pm. Learn all about our 2016 programs, receive guided tours of the camp, apply for camp staff positions, and much more!