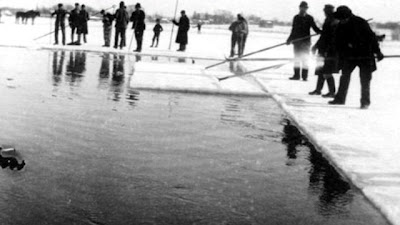 Long before modern day refrigeration was available, people relied on ice to store their perishable foods; and from the late 1880s until the 1930s, the ice industry of the Poconos was king!

During the winter, Stillwater Lake will freeze to a depth of about 8 to 14 inches thick. And so the ice company would glean the lake for its natural ice. The ice harvesting process was labor intensive. Crews of men using teams of horses would clear the ice field of snow. Then men measured and marked grids on the ice (usually at 22" x 32" to 44" square). Then horses would pull a tool that cut a groove along the grid. The next step was to cut through the grooves until the blocks broke off. The men would float these massive blocks of ice down a cleared channel to a chute, where they were hauled up and into an ice house.

Men used one-handed crosscut ice saws to finish cutting the blocks of ice. Each block was moved up chutes with hooks to various levels as the ice house filled with layers of ice separated and surrounded by layers of sawdust supplied by lumber mills. The sawdust helped insulate the ice from thawing. If properly stored, the ice in a fully stocked ice house would last throughout the year. The ice was shipped by train from the ice house to the various cities as needed. 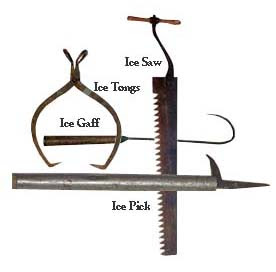 Pennsylvania was the nation's third largest producer of ice, following Maine and New York. Pennsylvania consumed about 1 million tons annually, cut on the state's lakes and rivers. The Pocono Mountain Ice Company employed over 500 men during the height of the harvest. It was reported that the Pocono Mountain Ice Company was harvesting ice for 6 cents per ton. Ice workers out on the lake were paid 30 cents an hour, while those working in the icehouse, where 300-pound ice cakes were being pushed around, were paid 35 cents an hour.

However, with the advent of refrigeration in the 1930s, the harvesting of the ice from the lakes became less and less profitable. Eventually, the ice company folded. In 1949, Samuel Rubel donated the company’s land surrounding Stillwater Lake to the Bethlehem Area Council (now Minsi Trails Council); allowing the Scouts to set up a permanent camp in the Poconos.

In Camp Minsi’s early days, many of the original ice company buildings were used for programs and lodging. It was not until the 1950s that the more permanent camp facilities were constructed for the Scouts on the western side of the lake. Remnants of many of the old ice company facilities can still be seen on the south and eastern side of the lake. The remains of the central ice house are fun to explore (and are only a short hike or canoe trek away from central camp). Relics from the ice harvest operations are displayed in the trading post (many of these were found by Scouts exploring the ruins).

Below is a video of the actual ice harvest operations on Stillwater Lake in 1921.

Does anyone know what happened to the old ice house? It had bunk beds and a fireplace, and Boy Scouts used to camp in it back in the 1960s.