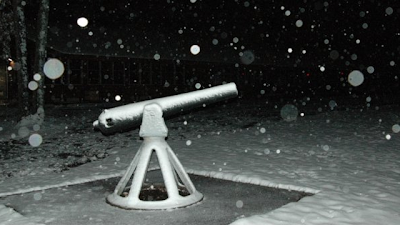 Camp Minsi was hit Thursday with one of the heaviest early-season snowfalls on record, and it continued into the weekend when a second round of snow hit the area on Saturday. 2 to 4 inches of snow blanketed Camp Minsi and the surrounding areas.

Unusually cold temperatures, about 30 degrees below normal for this time of year, mixed with precipitation to bring the unusually early snow to the Poconos and northeastern Pennsylvania.

However the snow did not stop Scouts from having fun at camp. Minsi Trail Council's South Mountain District held their annual fall camporee at Camp Minsi this weekend. Troops from Lehigh and Northampton counties came together for their customary fall event. Scouts participated in a variety of competitions and activities as snow continued to fall throughout the day on Saturday.

It is highly unusual for snow to hit the Poconos this early, but light snowfall has occasionally been seen before Halloween. Early season snowfall hit the area last October as well, although slightly later in the month. On October 27-28, 2008 the Pocono Plateau was slammed with 10 to 20 inches of snow! However meteorologists say that this year's October 15th storm is the earliest significant snowfall in the area since 1836. 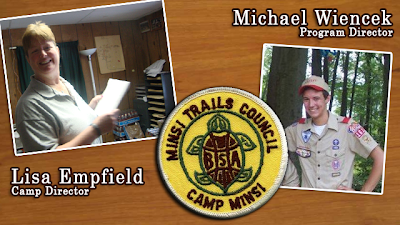 Now that the 2009 summer has come to a close, it is time to look to the future and start planning for the 2010 summer camp season. Minsi Trails Council has announced the appointment of their 2010 camp directors, and we are proud to announce that the Camp Director at Camp Minsi this summer will be Lisa Empfield. Lisa has been a long time Scouter and on the Camp Minsi staff for the past five years, most recently serving as the camp's business manager.

We are also excited to announce that Michael Wiencek has been named Program Director for the 2010 summer camp season. Mike is an Eagle Scout who first joined the Minsi staff in 2006. Most recently serving as Trail to Adventure director at Camp Minsi in 2008, last summer Mike worked at Resica Falls Scout Reservation where he oversaw and reinvigorated their first-year camper program.

Both Lisa and Mike bring many great ideas to camp, and are already working to enhance and strengthen the Scouting program offered at Camp Minsi. They are beginning the process of forming and developing the 2010 summer camp staff; interested applicants should submit the staff application located at either MinsiTrails.com or CampMinsi.org.

Additionally, Minsi Trails Council is currently working to put together exciting promotional materials for Troops and Crews. To schedule a summer camp presentation, please contact the council's director of support services, Todd Heyn, at either 610-465-8576 or todd.heyn@scouting.org.