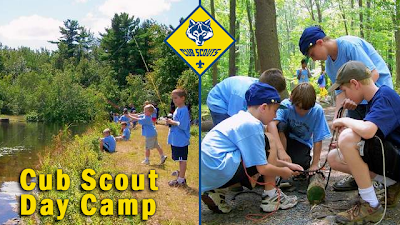 From The Pocono Record

The 1960s and the Civil War era were just two of the stops made by 160 Cub and Webelo Scouts during this year's "Time Traveler" program at Camp Minsi. And, since not a single drop of rain fell during camp hours, all enjoyed a full week of uninterrupted outdoor programs in great weather.

In its 37th year, the Mount Pocono camp is a gathering spot for hundreds of Cub Scouts from Monroe and Pike counties. For much of the summer, it serves as a resident camp for Boy Scouts, followed by the one-week day camp for cubs in August. The day camp's dedicated team of nearly 100 volunteers was again headed by director Dick Seip and organizer Mary Ann Boylan.

"It was a good year," declared Seip, who opened and closed each day's activities with a whirl through the time machine. "The program leaders did a super job. The kids had fun, and there was no liquid sunshine."

Two special interactive programs were presented. Deborah Seip and Molly Maroney of Quite Valley Historical Farm led the boys to experience life on a farm in colonial America; they learned how to milk a cow improvised from a rubber glove, since an actual cow wouldn't quite fit in Maroney's Subaru, carried water using a yolk, and cut wood with a two-man saw. A second program by Doug Roberts and his son Ryan Roberts, explored life for young men during the Civil War, culminating with a short marching reenactment that included all the boys.

During outdoor cooking demonstrations, longtime staffers George and Elaine Brodhead and Claire Wall showed Cubs how to cook over-easy eggs, toast and bacon on a hot rock, while Boy Scouts prepared cornbread in a Dutch oven for the Webelos. Webelos Scouts also had the chance to extend the week with a Friday-night campout program led by Troop 18.