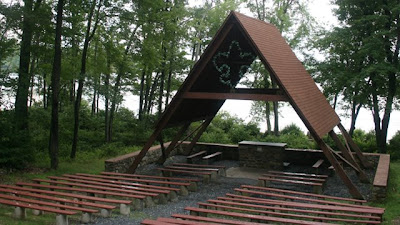 It has long been a tradition at Camp Minsi that each evening, just before dinner, we gather as a camp for vespers. During this time the staff will share some of their favorite poems, stories, or thoughts as we reflect on the day. The inspirational and thought-provoking words build upon the values of the Scout Oath and Law.

Below is a personal favorite of ours, a poem by James Patrick Kinney. Enjoy.

The Cold Within
Six humans trapped by circumstance in bleak and bitter cold;
Each one possessed a stick of wood or so the stories told.

Their dying fire in need of logs, the first man held his back,
For the faces round the fire, he noticed one was black.

The next man looking cross the way saw one not of his church,
And couldn’t bring himself to give the fire his stick of birch.

The third one sat in tattered clothes, he gave his coat a hitch.
Why should his log be put to use to warm the idle rich?

The rich man just sat back and thought of the wealth he had in store,
And how to keep what he had earned from the lazy, shiftless poor.

The black man’s face just spoke revenge as the fire passed from his sight.
For all he saw in his stick of wood was a chance to spite the white.

The last man of this forlorn group did nothing except for gain.
Giving only to those who gave, was how he played the game.

Their logs held tight in death's still hand was proof of human sin.
They didn’t die from the cold outside, they died from the cold within.

HI! I was a camper at Minsi last summer and hear another interesting poem/song. But for the life of me I can't remember the title, and for the longest time I've searched google and such to no avail. Help?
It was about a two towns, and their search for the others treasure, and how they end up destroying each other for a treasure completely made up. And maybe it involved a knight, i can't remember.
It was either a song or poem also. Any help??
Thanks!